Travel to the holy places

Anyone interested in the history and antiquities, as well as a passion for spiritual quest, I invite you to communication: reading, leave comments, share your opinion, ask questions!

Ashdod is an ancient Philistine city, the pride of the civilization of Dagon's admirers and the last refuge of the non-afflicted Nephilim. Today, from those mysterious creatures, there was nothing left (fake and false photoshops of supposedly giant skeletons do not count). Picturesque ruins on the shores of the Mediterranean Sea are the remnants of a medieval citadel of Arab rule. But written sources shed light on the events that took place here thousands of years ago.﻿

Posted by паломник at 4:39 AM No comments:

Masada - The Fortress of Heroes

"as they hope for in getting us under their power, let us leave them an example which shall at once cause their astonishment at our death, and their admiration of our hardiness therein"
...  Those others were nine hundred and sixty in number, the women and children being withal included in that computation. This calamitous slaughter was made on the fifteenth day of the month Xanthicus [Nisan]..
(Flavius Josephus "War of the Jews")

Now remember what Jesus warned 40 years before these events:
And when ye shall see Jerusalem compassed with armies, then know that the desolation thereof is nigh. Then let them which are in Judaea flee to the mountains...
Gospel of Luke
Posted by паломник at 3:51 AM No comments:

Chillon Castle located on the shores of Lake Geneva, right at the foot of the Alps. This monument with over 1'000 years of history, has always inspired artists and writers, from Jean-Jacques Rousseau to Victor Hugo and Lord Byron, from Delacroix to Courbet.
The oldest parts of the castle have not been definitively dated, but the first written record of the castle is in 1005. It was built to control the road from Burgundy to the Great Saint Bernard Pass. From the mid 12th century, the castle was summer home to the Counts of Savoy, who kept a fleet of ships on Lake Geneva. The castle was greatly expanded in 1248 by Peter II.
Chillon castle is protected by a sea from one site. The land side is equipped with defence towers and a wall walk.
Discover wall paintings from the 14th century, which you can see in the bedroom of the duke or the big suitcase collection. The four ceremonial halls give you the impression of the medieval life.

There are seven pillars of Gothic mould,
In Chillon's dungeons deep and old,
There are seven columns, massy and grey,
Dim with a dull imprison'd ray...
Lord Byron, 1816
Posted by паломник at 12:42 AM No comments:


The fortress of Akkerman is located on a promontory inside the estuary (liman) of the Dniester River, some 15 km from the point where the river enters the Black Sea. With a circumference of over 2 km, an area of 9 hectares, double walls, a ditch 13 m. deep, and 30 towers still standing, it is one of the most remarkable architectural and cultural monuments of the Black Sea region.

Akkerman fortress was variously known as Moncastro or Cetatea Alba. It is built on top of the remains of ancient Tyras, a Greek trading settlement founded in the 6th c. BC by colonists from Miletus in western Anatolia. In the 2nd c. AD Tyras was a Roman frontier post, and it survived until the 3rd c. when it was destroyed by the Goths. Thereafter the site was in Byzantine, possibly Ruthenian, and Genoese hands, before being held for a century by the principality of Moldavia. In 1484, the fortress was conquered by the Ottoman sultan Bayezid II (r. 1481-1512), and for most of a period of more than three hundred years, until the Russian Empire annexed it in 1806, Akkerman was held by the Ottomans. It became part of a chain of massive strongholds protecting the Black Sea-the 'Ottoman lake'-and its coasts from attackers from the north, first Ukrainian Cossack raiders and forces of the Polish-Lithuanian Commonwealth, and then in the 18th c. those of the Russian Empire. Given its strategic location on one of the two great rivers that flow south from the steppe into the Black Sea-the other is the Dnieper-it was among the most forbidding of the fortresses that stretched in an arc from the Danube to the Sea of Azov, and is one of the best-preserved.
Posted by паломник at 12:38 PM No comments:

Posted by паломник at 2:07 AM No comments:

BETHLEHEM - where Jesus was born

Posted by паломник at 9:45 AM No comments:

The town was first mentioned in Hvizdets Polish property acts in 1373. The Catholic community existed in this region since at least the 15th century. First Bernardine Monastery in Hvizdets was wooden, it was founded in 1715. But after 13 years the church burned down and in its place in 1734 built new brick monastery. At the same time, the town Hvizdets built a large wooden synagogue, since more than half of its inhabitants were Jews. And they are quite peacefully coexisted with the Catholics. This is due to the Polish rulers of the city.


Unfortunately, the synagogue has not survived to our time, most of the Jewish population died in hvizdets ghetto during the Nazi occupation. But monastery, also repeatedly burned and destroyed,  remains to this day. However, its modern look and finish it acquired in the early twentieth century, when the bell tower was rebuilt and monastery tower.
Posted by паломник at 9:02 AM No comments: 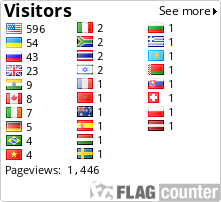